Sorry there have been so few posts. It took a little longer than we thought to get on the road. BUT…We Are On The Road! There were a variety of mechanical glitches (honestly too boring to write about here) that delayed our start. We got them sorted out by some pros and hopefully things will hold up. When we finally got the Winnebago in our possession our amazing friends in Cincinnati let us crash with them while we cleaned it up and made it liveable. Thanks guys!!! And please apologize to your neighbors for the plummeting home values in Hyde Park while we were parked there.

Over the course of about a week (and with tons of help from Ikea, our friends, and the Hyde Park Ace Hardware) we cleaned out all the cabinets (so gross) and reinforced the falling down shelves. We also yanked the crumbling yellow laminate counter and old sink out of the kitchen and installed a deeper sink and a butcher block counter from Ikea (who was conveniently having a ridiculous sale-hello $39 countertop!). This all sounds simple but it somehow became sort of insanely complicated due to our lackluster mastery of plumbing. Here’s the “before”:

“Before” sink and counter 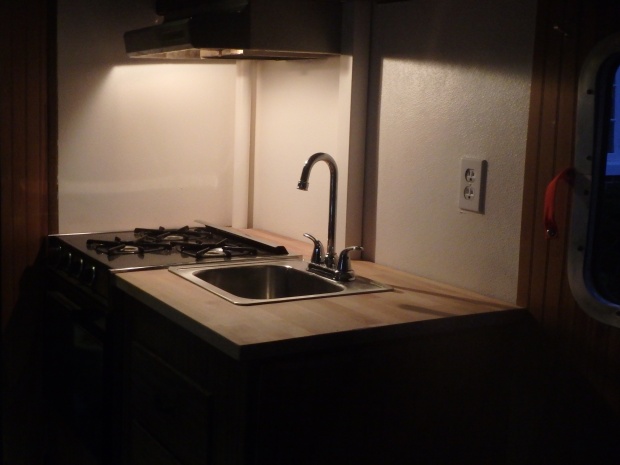 Who knew we were qualified to remove a stove??? 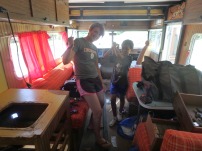 Here are more shots of the finished product: 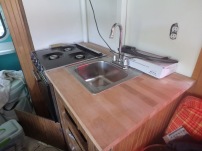 We also vacuumed the shit out of everything. And then we vacuumed again. We threw out the old sketchy mattress (which was only about 41″ wide) and put in a full-size mattress (also from Ikea) using a handy extension an RV guy named Josh built for us. Then we had to ACE hardware/MacGuyver a way to keep the bed from crashing down on our heads because the new bed is way heavier than the old one. This sounds risky and the full size bed extension was a pain in the ass to do, but SO WORTH IT. Otherwise, we’d never be able to roll over. Ever. Plus, we really wanted to be able to sleep with the pups. We’ll post some better pictures of the bed a little later, but that’s it over the driving seats, and that’s the latch system we made, and that’s Wembley getting excited to sleep in a loft. 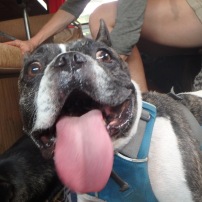 We also made all new curtains WITHOUT ACTUALLY SEWING. We used an inspired combo of blackout curtains from Lowe’s and several miles of fabric tape. We’ll see how long that lasts. Also, the new seat cushions we ordered from an online RV surplus place finally came in. They were 4 weeks late but 10 times better than we were expecting. We chose the material online and really had no idea what it would look like.Our  expectations were pretty low but they look incredible! We love them. We’re thrilled.

Here’s how things were looking when we left Cincinnati: 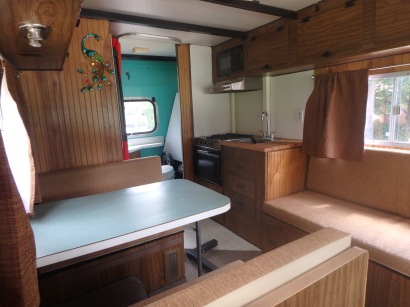 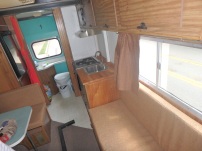 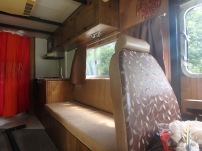 When were about 90% done we decided we just had to go. If we waited until everything was perfect we’d never get started. We had no more deliveries scheduled at our adopted home so we finally  piled the rest of our stuff into the Winnebago and headed out of Cincinnati. We decided we could finish up our remaining projects on the road. And that’s what we did. We spent the first night at a state park in Ohio trying to hang our new front curtains (we succeeded) and getting the bathroom into shape. 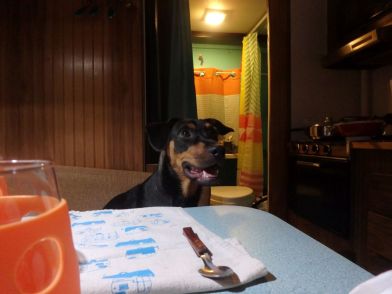 Frances is ready for dinner. 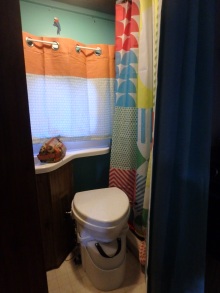 We’ve been at Mammoth Cave National Park in Kentucky for a few days…trying out the composting toilet, figuring out where to keep everything, trying to hook up the solar, touring the cave. So far, so good. No major mishaps. We’re currently trying to decide if we should head out to Colorado or up to Maine. Any suggestions?

One thought on “Ikea To The Rescue”