You might think we spend all of our time here on St. John sunning ourselves on the beach and drowning in Painkillers. Sadly, not true. We do other stuff, too.

Last week was Carnival in St. Thomas and we decided to go check out the Food Fair. It’s a big deal. Government workers get the day off to go. No joke. And it’s just one day, so we jumped on the ferry last Wednesday to check it out and I’m so glad we did. 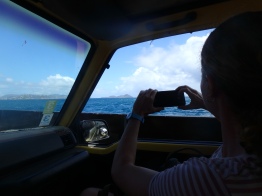 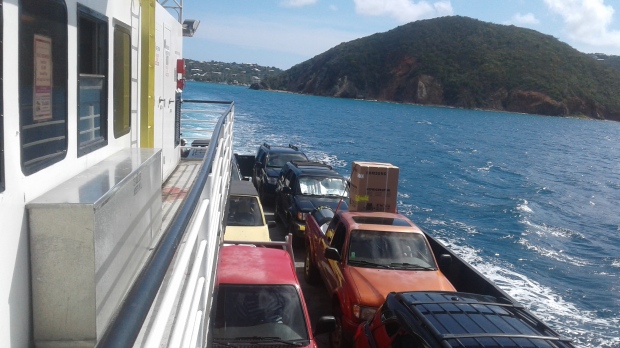 Getting back and forth on the car ferry. It’s like our Geo Tracker is amphibious. Sort of.

Normally, I would be skeptical of such an event. I’ve been to things like this over and over, hoping for handmade peach ice-cream and Mrs. So-and-So’s Famous Fried Chicken- you know, like in all the books I read when I was a kid. Like, suddenly I’m going to just walk into the Charlotte’s Web State Fair. Not surprisingly, I’m almost always disappointed by generic funnel cakes, fried snickers bars and maybe some turkey legs from Costco sold by pseudo-professional vendors. (One notable exception is the Pony Swim in Chincoteague, VA where you can get stellar oyster fritters. Really. You should go.)

Butter Conch Platter. So tasty. So much butter.

Anyway, the St. Thomas Food Fair was phenomenal. Packed with people. Tons of stands set up by church ladies, farmers, families, school groups and small vendors from throughout the Virgin Islands. It was very homespun and very solid. All the food was traditional and everything we had was fabulous. It definitely helped that people were very willing to advise us on which stand had the best whatever while standing in line. We got several excellent steers. It’s like a very frenzied, very caloric scavenger hunt where everyone was actually on the same team. 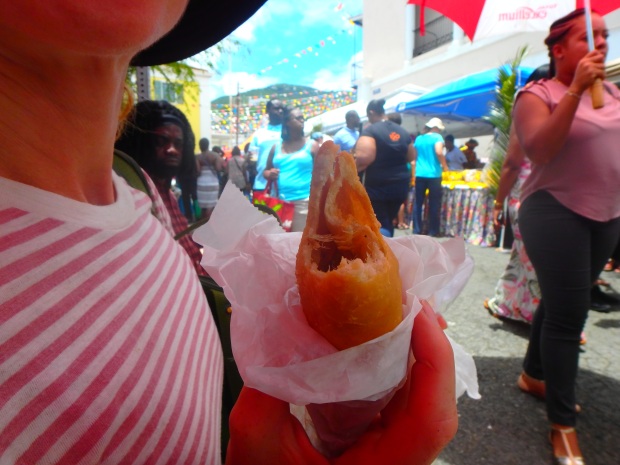 There were people selling johnnycakes, stew chicken, butter conch, whelks, and pates stuffed with shark, conch, saltfish, beef or veggies (pates here are like little fried hand pies with kind of a chewy crust. They are amazing.) There was a roti stand. There was tons of sweet stuff too, the usual suspects like coconut tarts and pineapple tarts but also stew cherries, gooseberry tarts, sugarcakes (which I think are pretty much just sugar), pumpkin fritters, and banana fritters. Of course there were Ital stands and tons of natural juices, drinks and tonics. There’s a guy in St. Croix who apparently sells kallaloo every Saturday in some square there, and he made the trip. It was delicious.  The whole thing was spectacular and I highly recommend checking it out if you’re ever in town for STT carnival. 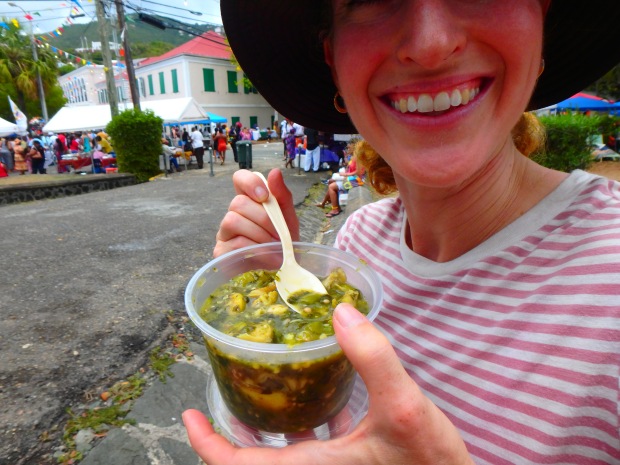 Chowing down on some seafood kallaloo.

On the way back to the car ferry, we stopped at Home Depot. Because it is a complete sacrilege to go to STT from STJ without going to Home Depot. Also, our internet, which used to be excellent, has been acting shady and we were told we needed to cut back some “bush” (trees), to give our antenna a straight shot to the tower. We were advised we’d need something called a pole saw for this…so we picked one up. Yeah, it turns out that a pole saw is quite literally a chainsaw on a 9′ pole. Did not see that coming. Anyway, now we have a pole saw. A really cheap one. It’s bananas.

Thought wearing all my clothes at once would count as protective gear.

The chainsaw end is heavier than than you’d think and the pole is pretty flimsy so it just bounces all over the place. You’re supposed to secure it to yourself (according to the directions) with this super shoddy shoulder harness. Once I made it onto our very steep hill, that strap seemed like way more of a commitment than I wanted to make to a chainsaw so I took it off. It was so heavy and so unwieldy I ended up just kind of flailing around wildly in a sea of “catch and keep” which is an almost impenetrable thicket of thorns and prickers. I comforted myself by screaming “Help Me” and “I am not a landscaper” at regular intervals. You know, to relieve the tension. Complete miracle no one was injured.

But at least the internet is moderately better.

2 thoughts on “Food Fairs and Chainsaws”